Walasse Ting has passed away at the age of 80 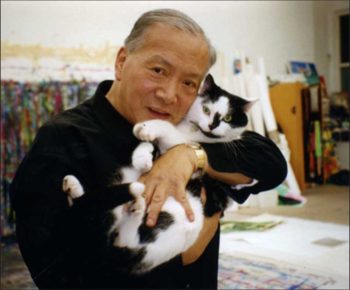 AMSTERDAM, May 19, 2010 last Monday May 17. Ting died in New York after he was moved from the Netherlands two weeks ago. Ting suffered a brain hemorrhage in 2002 in his home in Amsterdam, the town where he lived since 1985. His most popular theme was the female nude surrounded by lush flowers and animals, painted in his typical way. Brilliance and vitality characterizes Ting’s painted women, flowers and animals. Ting came to prominence in the 60s along with pop giants like Andy Warhol, Roy Lichtenstein and Tom Wesselmann.

The art scene in New York was buzzing in the 60s; the Abstract Expressionist period was at its absolute peak while the Pop Art movement was born. Andy Warhol and Tom Wesselmann became Ting’s close friends. Roy Lichtenstein lived next door to Ting. It is in this exciting era that Ting together with the artist Sam Francis developed the idea to publish a book with 68 original colored lithographs, a book that would reflect the various artistic currents of the time. This ambitious and unique plan was realized in 1964; One Cent life was published in an edition of 2000 copies. Colored lithographs by Pierre Alechinsky, Karel Appel, Jim Dine, Sam Francis, Asger Jorn, Roy Lichtenstein, Claes Oldenburg, Mel Ramos, Robert Rauschenberg, Jean Paul Riopelle, James Rosenquist, Bram van Velde, Walasse Ting and other artist made this publication a big success.

One Cent life became the proclamation of a new generation of painters and is now a reference in the history of modern art.

Ting’s painting career was honored by numerous prices and shows. His works are in the permanent collections including The Guggenheim Museum and MoMa in New York, The Chicago Art Institute, The Tate Gallery, London, Centre Pompidou, Paris, The Hong Kong Museum of Art, among others.

A great friend will be missed. Thank you for everything Walasse.

This website uses cookies to improve your experience while you navigate through the website. Out of these, the cookies that are categorized as necessary are stored on your browser as they are essential for the working of basic functionalities of the website. We also use third-party cookies that help us analyze and understand how you use this website. These cookies will be stored in your browser only with your consent. You also have the option to opt-out of these cookies. But opting out of some of these cookies may affect your browsing experience.
Necessary Always Enabled
Necessary cookies are absolutely essential for the website to function properly. This category only includes cookies that ensures basic functionalities and security features of the website. These cookies do not store any personal information.
Non-necessary
Any cookies that may not be particularly necessary for the website to function and is used specifically to collect user personal data via analytics, ads, other embedded contents are termed as non-necessary cookies. It is mandatory to procure user consent prior to running these cookies on your website.
SAVE & ACCEPT
back to top