This painting has not been properly associated with its source material.  Once you know that this is actually a contemporary painting of the Bloomsbury Group, the context of the painting is more understandable.  Rather than an a strange and archaic paint of a family reunion, it seems more likely that this is a reverential homage to Brodzky’s artistic and intellectual inspiration he derived from Bloomsbury.  This is also evident in his linocuts which echo Vanessa Bell and Roger Fry’s work. 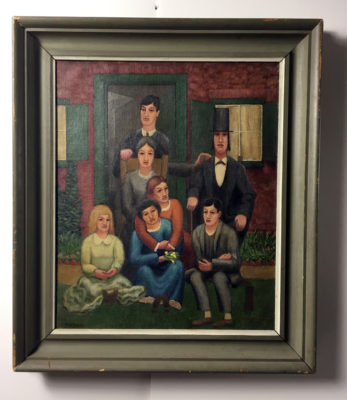 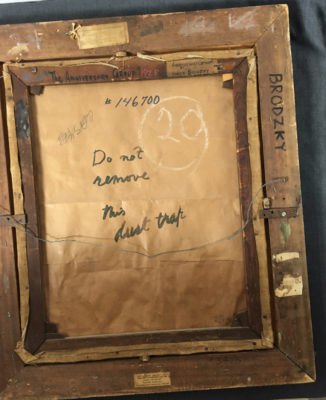 Horace Brodzky was a student at the School of the National Gallery of Victoria in Melbourne. He was one of the earliest Australian artists to embrace the modern style of the twentieth century. He was the first Australian to be exhibited at the Venice Biennale in 1912 and the fourth recorded artist to experiment with lino-cutting, being the first to seriously involve himself in this medium. He was a member of the London Group and was the intimate friend of such well known artists and Henri Gaudier-brzeska, Jules Pascin, Hacob Epstein and David Bomberg. His graphics were used to illustrated the literary works of Ezra Pound, Eugene O’Neill, Upton Sinclair and Theodore Dreisler.

Brodzky’s work is represented in such important collections as the British Museum, the Tate gallery, the Victoria and Albert Museum, the National Museum of Wales, the Arts Council of Great Britain, the Museum of Modern Art in New York, the Tel Aviv Museum, the Australian National Gallery of Victoria.

1885 Born in Kew, Victoria. Son of Australian journalist Maurice Brodsky
1901 Attends the National Gallery School
1905–07 Travels to San Francisco and New York
1906 Enrolls in National Academy of Design, New York
1908 Moves to London
1911 Begins studies at the City and Guilds Art School, Kensington. Here he formed a close association with fellow artists David Bomberg, Henri Gaudier-Brzeska, Jacob Epstein, and Mark Gertler. During this time Brodzky also traveled to Rome, Naples and Sicily with friend and notable American poet John Gould Fletcher, encountering the works of Piero della Francesca who became a major influence on his art
1915-22 Upon the death of good friend Gaudier-Brzeska, Brodzky returns to New York and soon finds work in art journalism and theatre designs. He also continues his painting and printmaking
1920 A portfolio of Brodzky’s linocuts is published by Egmont Arens
1923 Returns and settles in London, England
1929 Brodzky’s work is included in an exhibition of linocuts curated by Claude Flight, Redfern Gallery
1933 Brodzky’s biography of Gaudier-Brzeska is published
1948 Became Art Editor of the Antique Dealer and Collectors Guide
1969 Dies in London, England

Statement:
“Brodzky prefers the ordinary ‘dip-in’ steel nib, for this enables the hand, by carrying its pressure on the paper, to broaden the line at will, or rather in obedience to the obscure subconscious or half-conscious promptings which guide the hand to its task. He makes no preliminary studies, draws no pencil outline, carefully rubbed out afterwards to give a false impression of spontaneity. There are no erasures or alterations. Each drawing is made ‘au premier coup’. It is made very quickly, as a unity, and when finished the artist cannot remember at what point it was started. The drawing has been thrown on the paper, as it were, with a single gesture”