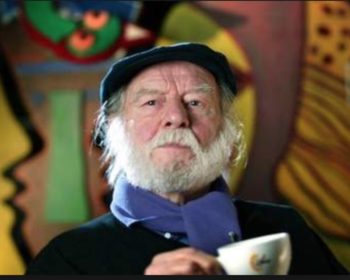 (Guillaume van Beverloo) attended the School of Fine Arts, Amsterdam, and later studied printmaking with the noted S.W. Hayter in Paris in 1953.

Corneille was the founding member of CoBrA, participating in all aspects of the movement. Artists from Copenhagen, Brussels and Amsterdam came together to form CoBrA in Amsterdam in the late 1940’s.

Throughout the 1950’s, he traveled and exhibited in Europe, Tunisia, South America and the Antilles. He first came to New York in 1958 having two years earlier won First Honorable Mention Award at the Carnegie Institute.

In the United States, he is acclaimed for his spirited and imaginative works. Corneille has the ability to pack his paintings with form and content while not sacrificing any of the virtues of abstractionism. He has been linked to Klee’s idea of finding a single formula to comprise man, beast, plants, earth, fire, water and air. His works include certain recurring symbolic forms, which have resulted from his exotic foreign travel.

Among the many awards and prizes he has won is the Guggenheim Award for Painting in 1959. His works are in the collections of museums on each of the world’s five continents. Since his first solo show in 1946, he has enjoyed more than 190 one-man shows and four museum retrospectives, most notably at the Stedelijk Museum in Amsterdam in 1966.

This website uses cookies to improve your experience while you navigate through the website. Out of these, the cookies that are categorized as necessary are stored on your browser as they are essential for the working of basic functionalities of the website. We also use third-party cookies that help us analyze and understand how you use this website. These cookies will be stored in your browser only with your consent. You also have the option to opt-out of these cookies. But opting out of some of these cookies may affect your browsing experience.
Necessary Always Enabled
Necessary cookies are absolutely essential for the website to function properly. This category only includes cookies that ensures basic functionalities and security features of the website. These cookies do not store any personal information.
Non-necessary
Any cookies that may not be particularly necessary for the website to function and is used specifically to collect user personal data via analytics, ads, other embedded contents are termed as non-necessary cookies. It is mandatory to procure user consent prior to running these cookies on your website.
SAVE & ACCEPT
back to top