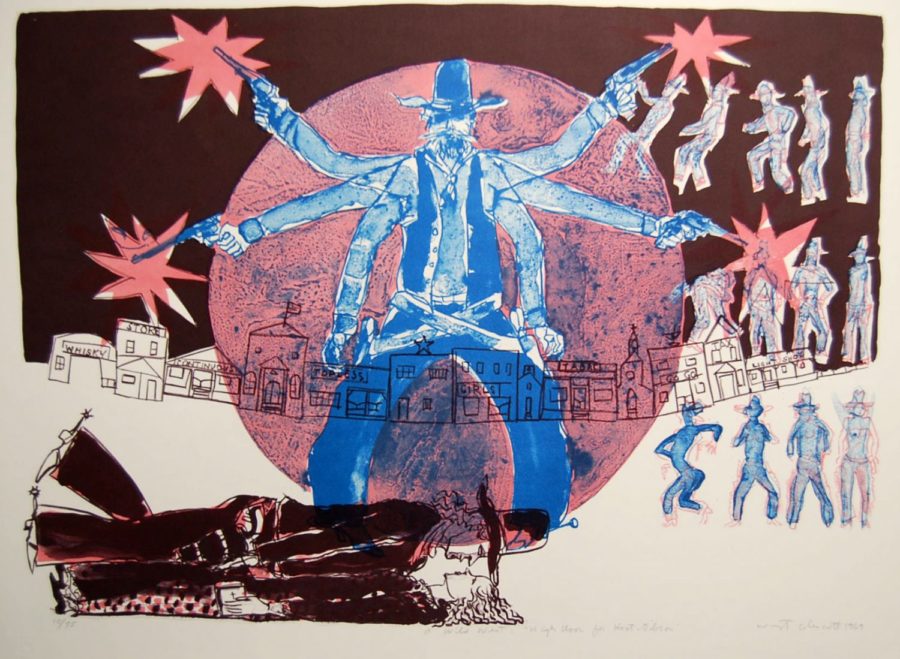 Warrington Colescott, an innovative printmaker who deftly navigated the intersection between tragedy and high comedy with biting etchings about civil rights, history, politics and the Internal Revenue Service (which audited him), died on Sept. 10 at his farmhouse in Hollandale, Wis., southwest of Madison. He was 97

His son, Julian, confirmed the death.

“Etching quickens the blood, lights up the eye, affects the satirical mind in the same way that a low-cut neckline affects Dracula,” Mr. Colescott wrote in a catalog for an exhibition of his prints at the Milwaukee Art Museum in 1996.

A Fulbright and Guggenheim fellow whose prints are widely collected, Mr. Colescott employed a figurative style that tinkered liberally with reality in wildly colorful, cartoonish and sometimes disquieting ways.

“In Birmingham Jail” (1963) was inspired by the bloody demonstrations in the Deep South against segregation in the 1950s and early ’60s. Its two panels show rows of darkened jail cells where protesters are beaten by grotesquely drawn police officers — images that Mr. Colescott interspersed with pictures of a girls choir and Bart Starr, the Alabama-born quarterback of the Green Bay Packers, his favorite team.

“Golly!” he says. “A big mother.” Beneath the jet, a whale is harpooned in the middle of an oil spill

“He was a dyed-in-the-wool Democratic progressive,” Mary Weaver Chapin, who curated a retrospective exhibition of Mr. Colescott’s prints at the Milwaukee Art Museum in 2010, said in a telephone interview. “And this was really an attack on Bush’s environmental policy.”

Mr. Colescott sometimes created series of etchings, like one about Lyndon B. Johnson’s Great Society, another about the bank robber John Dillinger and a third, “A History of Printmaking,” that reimagines historical moments in graphic arts involving Benjamin Franklin and artists like Rembrandt, Albrecht Dürer and Robert Rauschenberg.

In the riot of bellicose images that compose “Goya Studies War” (1976), Mr. Colescott shows Goya — the Spanish master who created a series of prints in the early 19th century called “The Disasters of War” — talking to a general and taking notes while a corpse is removed on a cart.

“What makes Colescott’s work so appealing is its mix of erudition and irreverence,” the critic Jennifer A. Smith wrote in 2010 in Isthmus, an alternative weekly newspaper in Madison, about an exhibition of his work that year at the city’s Grace Chosy Gallery. His prints, she added, were in the tradition of artists and social critics like William Hogarth and Honoré Daumier.

Warrington Wickham Colescott Jr. was born on March 7, 1921, in Oakland, Calif., to Creole parents from Louisiana. His mother, Lydia (Hutton) Colescott, was a schoolteacher who played the piano; his father, Warrington Sr., was a porter on the Southern Pacific Railroad and played the violin.

As a boy, Warrington was drawn to artifacts that his father brought him from fighting in France during World War I — like a gas mask and a dented helmet — and used them to play war with his friends and scare people on Halloween. He drew pictures, too, and was influenced by newspaper comic strips.

“My drawing style has, in many ways, remained constant since childhood,” he said in the book “Progressive Printmakers: Wisconsin Artists and the Print Renaissance” (1999), which he wrote with Arthur Hove. “The marks of the pen or brush spill out with a kind of attack. Ultimately, they all fuse together and become a narration.”

He drew cartoons for his high school newspaper and for the campus newspaper and humor magazine at the University of California, Berkeley, where he earned a bachelor’s degree in art. One of his cartoon creations was adapted into Berkeley’s mascot, Oski the Bear.

In 1942, Mr. Colescott was drafted into the Army and served in Okinawa late in World War II and in Korea as part of the postwar occupation. On his return, he got his master’s in art from Berkeley and began teaching drawing and painting at Long Beach Community College in California. He joined the University of Wisconsin-Madison in 1949, where he taught painting and printmaking for 37 years.

Mr. Colescott started out concentrating on painting and silk screens but became fascinated with etching after a year of study at the Slade School of Fine Art in London in the 1950s under his Fulbright grant. His initial etchings were abstract, but they soon evolved to a more figurative look that suited the events and figures he would illustrate. 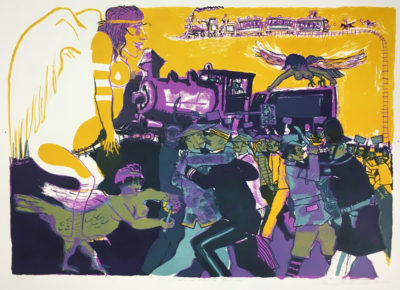 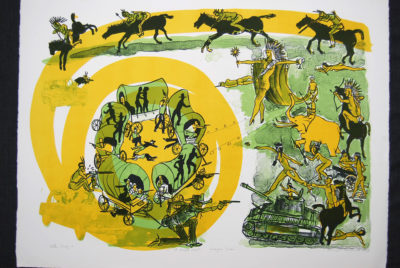 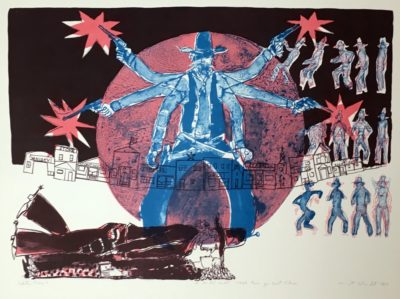 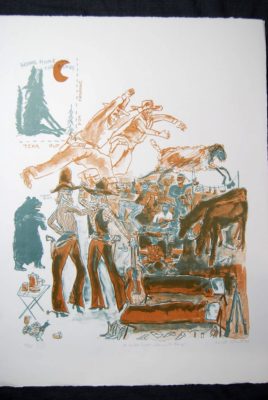 Warrington Colescott A Wild West: Home on the Range -... 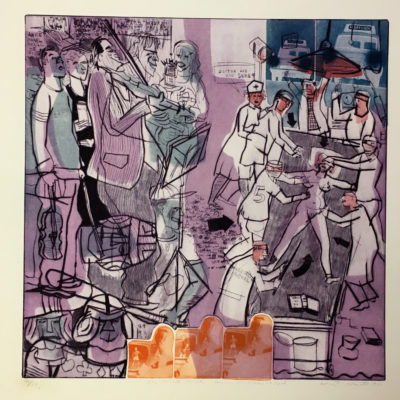 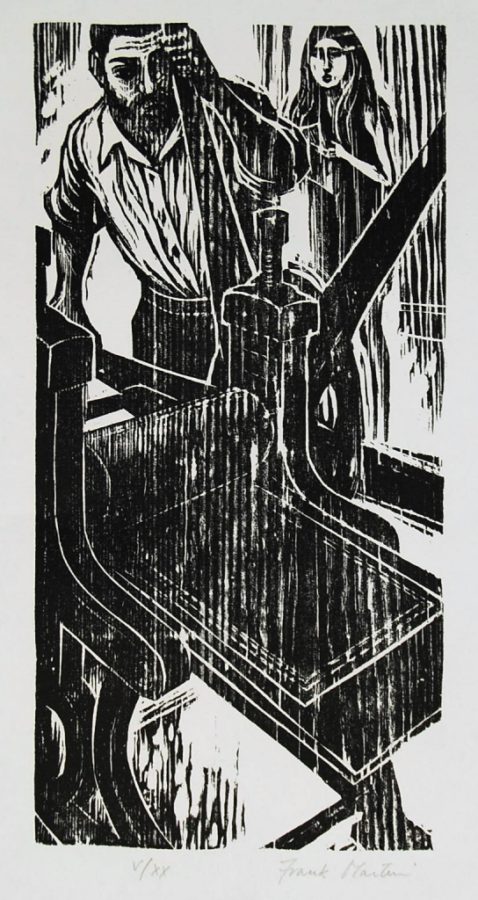 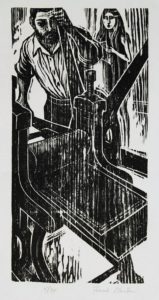 A print is not a reproduction. A print, in whatever medium, is or should be made and conceived by the artist himself; he will have knowingly chosen his medium so as best to express his idea, and he will have supervised its execution at every stage. In certain cases others may have helped him in the technical execution and printing, but his signature on every proof is a witness to his approval of each final copy.”

This website uses cookies to improve your experience while you navigate through the website. Out of these, the cookies that are categorized as necessary are stored on your browser as they are essential for the working of basic functionalities of the website. We also use third-party cookies that help us analyze and understand how you use this website. These cookies will be stored in your browser only with your consent. You also have the option to opt-out of these cookies. But opting out of some of these cookies may affect your browsing experience.
Necessary Always Enabled

Any cookies that may not be particularly necessary for the website to function and is used specifically to collect user personal data via analytics, ads, other embedded contents are termed as non-necessary cookies. It is mandatory to procure user consent prior to running these cookies on your website.